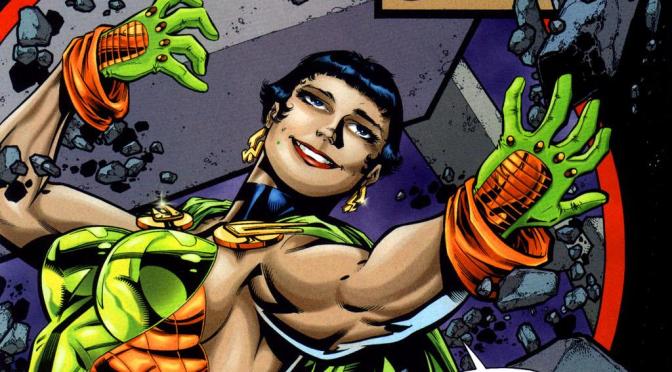 Hello, Legions of the Unspoken!

Dean Compton back with you, and I am ending a delightful June as we here at The Unspoken Decade celebrate ROBOT MONTH!  Robots pretty much permeate every single aspect of genre culture that we love, and it only seemed right that at some point we celebrated our bolted-up buddies with a tribute!  You saw the Death’s Head entry, and we had planned for a Transformers Generation 2 podcast, but scheduling issues prevented it, so we’ll end the month right here with Tomorrow Woman from JLA #5!

There isn’t much else that can be said in regard to the amazing Grant Morrison/Howard Porter/John Dell run on JLA.  The books revitalized interest in the team, which had waned for a lot of reasons.  Some of it was due to the big guns not being in the lineup.  Some of it was due to spinoff books that folks were watering down the concept or betraying the concept of the Justice League in its entirety. (Extreme Justice is notoriously hated for that reason.)  Some folks had been turned off by the humor from the Giffen/Maguire/DeMatteis days and never returned to the book(s). Whatever the reasons were, the Justice League’s presence among superhero fans had reached its nadir.

Morrison had spun a lot of great tales by this point, from his acclaimed Animal Man to The Invisibles to Skrull Kill Krew.  His Doom Patrol featured characters such as Danny The Street and Flex Mentallo.  His imagination was seemingly on another level than many of his peers in the comic book industry, let alone folks who didn’t create larger than life tales for a living.  So when it was discovered that not only would he be at the helm of the JLA relaunch, but that he would also be using the so-called “Big 7” (Superman, Batman, Wonder Woman, Martian Manhunter, Aquaman, Flash, & Green Lantern), it meant that one of the complaints that surfaced repeatedly in regard to much of the early 90’s Justice League stuff (the aforementioned lack of big guns) would be dealt with, and with Morrison’s known reverence for the history of these icons, the series would become known for all out action with a respect for all the magnificent history that makes up the DC Universe.

The standalone issue really shines as an example of all that this run would come to be known for.  If you want someone to get the JLA, you could just hand them this issue and they’d understand the greatness instantly.  Speaking of getting the JLA, that’s precisely why old super-genius JLA enemies Professor Ivo and Dr. T.O. Morrow have decided to join forces, and even as the comic opens, they seem to believe that they have already won.

Villains busting out champagne before a scheme even starts is always a sure sign that they have cooked up a doozy.  You just know this one’s gonna work for these two, whom I have always enjoyed.

Now, to get back to the fact that some of the previous 90’s incarnations of the Justice League were just not up to par in the eyes of some, we see the funeral of one of them.  Metamorpho, who actually dies in JLA #1, is a member of the previous league.  While a few may not have enjoyed his presence in the Legaue in the early 90’s, I always thought he was a really cool character who played a good everyman.  Alas, here he is dead, and only Superman seems to care.

Superman can’t tarry for too ling at Metamorpho’s funeral, though, because a mysterious electromagnetic creature known as “IF” is dealing out some mega punishment and the JLA is going to have a meeting about it.  Superman uses Batman’s JLA teleporter, and we see some gruff Batman.  You know the stuff by heart if you have watched the Justice League cartoon or read, I dunno, six Batman comics since 1986.

Superman teleports up to the JLA satelite just in time to create an awkward moment for Flash (Wally West) and Kyle Rayner (Green Lantern).

For all the talk of Grant Morrison’s JLA about how he got the concept by placing DC’s high-powered pantheon into high-stakes cosmic superhero action adventure, I think where he really nailed the JLA was with his characterization of the League was in little moments like this, where the characters personalities come to the forefront.  It can be hard to balance the Gods of the JLA, but Morrison deftly does so here and all throughout his run.

Howard Porter (pencils), John Dell (inks), and Pat Garrahy (colors) all deserve a lot of credit for making this work as well.  The art is epic and powerful, and most importantly, it’s just the type of visuals a story like this needs.  I have raved about Morrison’s work on the title, but this title doesn’t grow its legend without them too.

This incarnation of the JLA has decided to possibly expand from seven to twelve, despite these guys having only just gotten together.  The nominees run the breadth of the DC Universe…

Of course, if you’re like anyone else, one member of that cadre of recruits stands out as not really belonging there, and I am not talking about Guy Gardner.  Hitman’s book was brutal and decidedly anti-superhero at times.  (Check out our own Darry Weight breaking it down for you at that link!) He belonged nowhere near one of the flagship superhero books DC put out, but Morrison not only makes it work, but he arguably makes it into one of the most memorable moments of the run.

After that bit of humorous irreverence, we finally get a candidate that the JLA takes seriously and wants pretty badly.  Her name is…Tomorrow Woman!

Tomorrow Woman quickly aces the initiation procedures for the JLA, and that’s a good thing because the League has been having severe issues with a thing called “IF.”  This “IF” shows up randomly and seems to be a computer that is only programmed to destroy.  The JLA has its hands full as it attempts to deal with the consequences.

Of course, this Tomorrow Woman is “just” an android that Professor Ivo and T.O. Morrow have constructed in another one of their seemingly never-ending attempts to destroy the JLA.  They have been JLA foes since the 1960’s, and this is easily their best scheme yet.  This android is so real that it isn’t just fooling the JLA; it’s fooling itself. 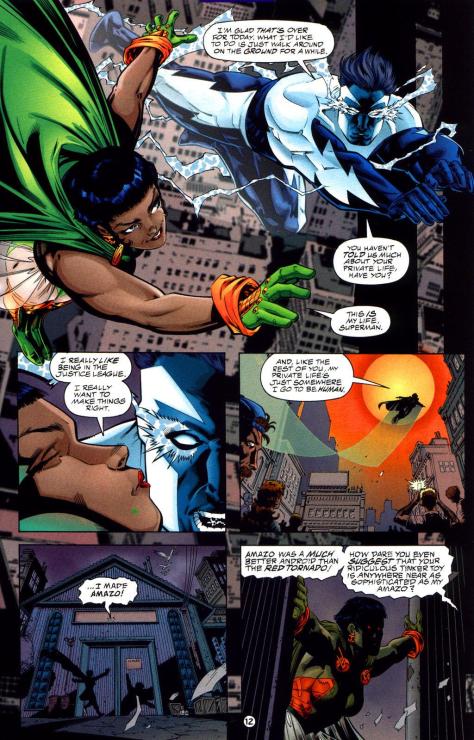 Tomorrow Woman is about as cool with that as a mutant in the Marvel Universe is with Genosha, but these two are too busy arguing about which of them did the best work on this super-powered automaton.  As far as where I come down on their argument, I like Red Tornado more than I like Amazo.  Please argue vehemently about that in the comments the way Berner Sanders and Hillary Clinton supporters have been arguing on my Facebook page.  On second though, don’t.  Please fucking don’t.

Batman figures out the deal behind “IF” (which I read in Jerry Seinfeld’s voice) and relays the information to Flash, who takes it to the JLA.  “IF” is wreaking havoc on our favorite pantheon of superheroes, and Flash gets there just in time to save Martian Manhunter from certain doom.

The JLA finds themselves on the precipice of the moment that Ivo and Morrow have been preparing for.  The only thing that will shut down “IF” is an EMP blast that Tomorrow Woman has been programmed to use to take out the JLA.  But then…something happens. 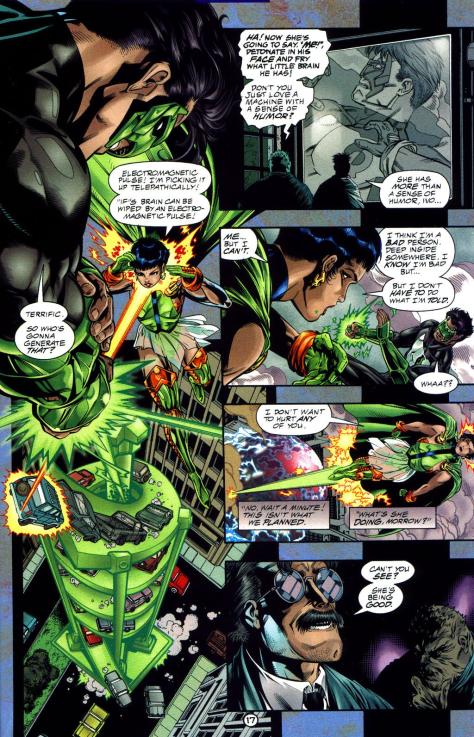 I can’t put into words just how inspiring this moment of JLA #5 is.  Morrison manages to make you care more for an android that you only see in one issue of the series than some characters that you see for years and years.  Tomorrow Woman was the robot who was programmed so well that she fooled herself into becoming human.  That makes me hopeful for all of us.  If a robot can overcome its programming then maybe, just maybe, we humans can overcome ours.

Next month we’ll have Chase, Martian Manhunter, and more!  Stick around for the summer, Legions of the Unspoken!