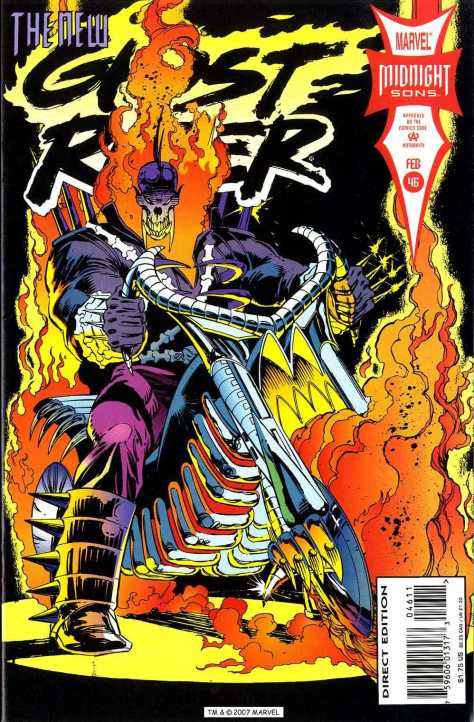 Welcome back, my fellow Unspoken-ites! (God, that’s never gonna catch on….) It is I, your loyal Symbifan, returned to share with you my hilarious and thought-provoking observations. (You know you love me!) This time, I speak of the short but awesome period in which The Spirit of Vengeance had seemingly been destroyed and another rider had risen up to claim the mantle! I speak of course of Vengeance! Intrigued? Well then, without further ado….

Our tale begins in a dark and dank mausoleum within the gates of Cypress Hill Cemetery. Here, perched atop a dusty pedestal, rests all that remains of the Ghost Rider. His grinning skull stares blankly at nothingness. His unholy flame to burn no more. (Damn, I’m an awesome writer, huh? I mean, I really set the mood there! Self high five!)

Now, it should be noted here that this in not a Ghost Rider story per se. No, this is a story that focuses on the character known as Vengeance during his time filling the boots of the title character. That said, there will be parts of the story pertaining to Ghost Rider or other supporting characters that I will leave out of my narrative. This doesn’t mean that I dislike the original story or characters that the good folks at Marvel so lovingly created. I simply wish to focus on a different character’s journey. This is Vengeance’s time to shine. (Whew! I was way too serious for way too long there! Let’s return to the article, shall we?)

We find Lt. Michael Badilino parking his motorcycle outside the aforementioned mausoleum. As the motor runs he ponders, with Ghost Rider dead, does he even need or want his powers as the demonic vigilante called Vengeance? He is still a cop after all. He can still do good in the world without his skull-headed alter ego. He wishes to know, not for the first time since his death, what Dan Ketch AKA Ghost Rider, would advise him to do. As he wanders within to pay his respects, he is surprised to see that the skull and leather jacket of his friend and ally….are missing! (But we just saw them on page one! Damn crafty thieves! You turn around for one second and wham!) Enraged, hellfire bursts through the mausoleum doors, transforming Badilino’s bike! Moments later, a transformed Badilino emerges himself. Only he is Lt. Michael Badilino no more. He is Vengeance! Balling his leather-clad fists, he vows that he will find Ghost Rider’s remains and that whoever took them will feel his wrath! (Neat, huh?! Go on. Keep reading!) 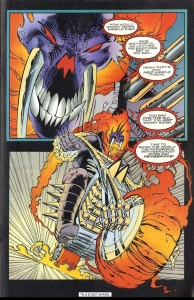 We then find ourselves at another part of the same cemetery. At this particular mausoleum, graverobbers are just putting the final touches on a lock and chain with their trusty crowbar. They comment on just how much the price for human skulls has gone up. (Take note, kiddies. Comics do teach you valuable things.) As they enter, they immediately find their gruesome prize. But before they can claim it, a clawed hand slashes through the air, decapitating one of the thieves! Unaware of this, Vengeance rides out of the cemetery gates, deep in thought. It’s then that the clawed creature makes itself known as it easily hurtles the fence, bag in hand! Vengeance is witness to this and decides that Ghost Rider would investigate this further if he were in this situation. He revs up his hellish bike and speeds off after the monster, leaving a hellfire trail in his wake!

It doesn’t take long to locate the creature. Vengeance spies it fleeing down a nearby alleyway on foot. Timing it just right, he leaps from his motorcycle and strait towards the monster! Just then, a clawed hand snaps back, catching our hero by the throat! The momentum and the creature’s own strength is then used to toss Vengeance straight into a parked car! (I’d be saying, “Let’s see the Carfax.”) This minor setback doesn’t keep the rider down for long. He leaps to his feet in just enough time for the beast’s form to finally be revealed! (Look at that thing! Damn, it looks like a sexy Kardashian!) 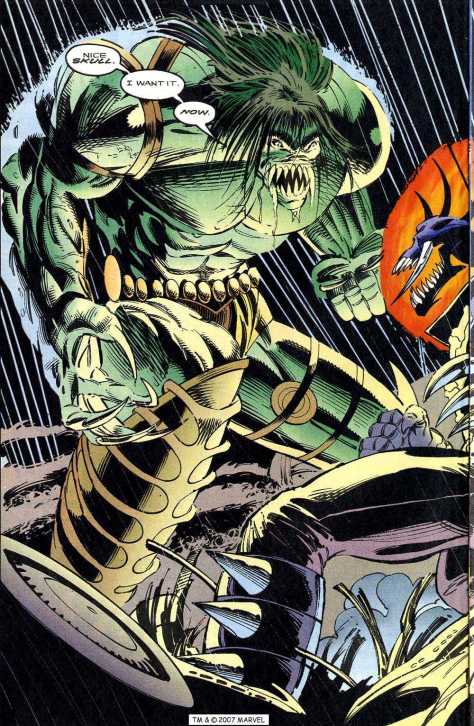 It then speaks, threatening to take the skull of our ghostly champion! Vengeance answers this with a blast of hellfire channelled from his fist! This hurls the creature through a brick wall at the opposite end of the alley, destroying the bag it carried. It is revealed to have been filled with human skulls! Declaring this to be the thief of Ghost Rider’s skull, Vengeance attacks again by leaping at his enemy. This proves foolish once again as he is struck in midair by a giant fist! The creature then pulls some sort of “lightsaber thingy” from God-knows-where and lifts Vengeance by the throat with it’s free hand. But as the monster raises the weapon to strike, Vengeance stabs it straight through the heart with one of his shoulder spikes! He then follows up by throwing a few more into the beast for good measure! The fight is finished by pummeling what life remains out of it with his fists! (Talk about brutal! I haven’t been this pained since I watched DC’s Steel movie starring Shaq! Well, maybe it wasn’t that bad….the beating wasn’t anyway.)

Later, Vengeance meets up with others of the Ghost Rider extended family to bury the hero the traditional way. It turns out that the skull and jacket been in the care of a loved one, not quite ready to let go. When the rider is final laid to rest, Vengeance watches from a short distance and makes a silent vow. He would protect the innocent like Ghost Rider before him. He would be the new Spirit of Vengeance!

But wait, there’s more! Our next issue begins with a highly decorated police officer being thrown from a tall building! He lands many stories below only to be vaporized by a blast from the sword of his killer who’s standing high above! (It’s now that I feel that I have to share a picture of this assassin. Why? Because of his amazing purple jammies, of course! Nothing says hired killer more than a skin-tight purple one-piece after all! We’re dealing with a real pro here!) 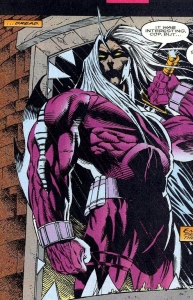 Anyway, we return to the murder scene where Lt. Michael Badilino has just arrived. He examines what remains of the corpse, stating that he knew the other officer well and that whoever did this is going to pay. Just then, the killer is spotted above by Badilino! He hasn’t left the scene after all! Running at top speed, he rushes after the perp! But when he reaches the correct floor, he finds himself facing not only his friend’s murderer, but his deadly blade! It turns out that the killer, called Dread, has been awaiting him in particular and that a Mr. Hellgate sends his regards! Dread then pulls the same “energy blasting sword routine” on Badilino! Badilino is faster then his friend before him, however, and manages a dodge down some nearby stairs! It is at the bottom of said stairs that Michael Badilino ceases to exist, and Vengeance is reborn!

Wasting little time, Vengeance races back up the stairs to confront a very confused assassin! Very few words are spoken between them before Dread attacks, slashing his blade through our hero’s midsection! Vengeance counters with a thrown fist but misses as the villain flips over him, onto the roof. It’s there that both combatants unleash energy blasts at one another! But, before the battle can continue, police finally arrive on the scene. Dread executes a backflip and disappears, leaving Vengeance to take an onslaught of bullets from the cops! Not wanting to hurt other defenders of justice, Vengeance falls from the roof and disappears himself. 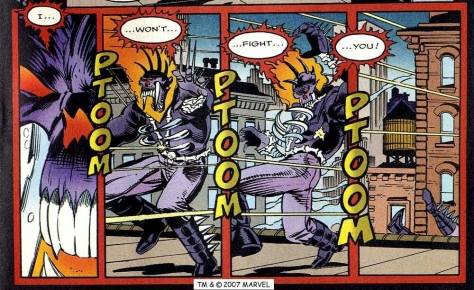 We are then transported to a scene below the Cypress Hill Police Headquarters where Badilino and his special task force plot the destruction of this “new” Ghost Rider as they did the one before. Well, all but Badilino that is. He shows little interest in taking down this fire-headed vigilante. (Gee, I wonder why! This just reeks of irony! I mean, wouldn’t this fall under suicide if he were into the conversation?) Badilino calls it an early night, surprising his police pals, and exits. But he’s not out for the night. Oh no. The night has only just begun for his alter-ego!

And what a night it is! Vengeance uses all of Lt. Michael Badilino’s police knowledge to track down, invade, and generally scare the piss out of every criminal lowlife possible! And all the while, he questions those conscious about Hellgate. He continues to come up empty until, feeling defeated, he finally decides to call it quits and head home. Later, while sitting in his apartment, Badilino considers his options until suddenly, his very own task force bursts in his door, weapons at the ready! As it turns out, Dread is in Badilino’s apartment complex, searching for him! Transforming when he’s free of his mens’ prying eyes, Vengeance finds Dread and the battle begins!

The fight starts with Vengeance charging Dread like a damn football player on gamma-steroids (Which seems to be a trend with the guy, admittedly. I mean, geez, his opponent has obviously shown he’s quite the nimble little minx! Think, man! Think!) This is easily dodged with a forward somersault and kick to the spine. (See?!) Dread then comes at the hero with his sword. This time, though, Vengeance is ready and dodges the attack! He then kicks the purple-clad assassin (Snicker!) under the chin, throwing him off balance. Before he can recover, Vengeance then delivers blow after blow until the villain can no longer stand! As the police arrive on the scene to arrest Dread, Vengeance takes his leave, but not before Dread can have the final word. He threatens that when Mr. Hellgate gets him out of jail, he will remember this night and come searching for our hero!

(Dedicated to my amazing sweetheart, Renee Grill, for giving me the awesome title for this article and listening to my pointless comic theories and trivia for over ten years! She’s the true superhero for not going crazy! Lol! Love you, baby!)