Howdy y’all! It’s me, that danged varmit, Symbifan! Yep. I’m back with that part two y’all were waitin’ fer! So, sit on back, get yerself comfy, and lissen while I dish out them fancy word-vittles yer all a wantin’! (Yep. That energy drink has definitely screwed with my brain.)

As we return to our Elseworlds tale, we find Superman and Lana Lang embracing within a hidden sewer tunnel after so very long apart. (Does anyone else think ol’ Clark should have chosen Lana over Lois like me? Lana always seemed to love Clark, Clark. Not Superman. Clark. Lois never seemed interested unless he was decked out in blue spandex. This says all kinds of things about her sexually. But alas…..) They emerge into a hidden complex where the heroes and their small army of human resistance fighters are training for battle.

To say things aren’t going well would be an understatement. Batman is training everyone much too hard in hand-to-hand combat, The Flash is firing at falling debris with a handgun at super-speed but panics and emotionally shuts down when the situation calls for him to run, and Green Lantern seems too grim and fierce. It seems like he simply wants this war to end so he can die. (Those are our heroes folks. Kind of dark and depressing, huh? Yep. It’s like someone slapped them all with the Marvel Comics stick repeatedly!)The upside is when the mouthy and cocky Superboy spears with Wonder Woman. All seems to be going well until the young hero actually plants one on a surprised Amazonian princess! She clocks him so hard that you’d swear his head’s gonna snap clean off!

It’s then that Metallex makes his appearance and scares the holy hell out of Lana! (Dude does kind of look like a freaking terminator. I’d wet my panties too!) The robot scans her for hidden listening or tracking devices. Satisfied she’s clean, he and Superman talk war plans and about finding and rescuing the missing Lois Lane. To this, Lana interjects that she’s been doing some undercover work and may just be able to reunite the two love birds tomorrow night! They make plans to meet in front of the debris that once was the Daily Planet building.

The next night, the Super Seven enter the wreckage of the once proud city of Metropolis. Scouting ahead and moving carefully, they head to the meeting place. They are stopped suddenly by the cries of a frantic Lana Lang. She screams that it’s a trap! And a trap it is! A large force of Horde warriors teleport in and surround them! Wasting no time, the heroes charge into action! Their training may have been messy and unorganized, but in battle? They work as a well-oiled machine! The sight is awe-inspiring! The Justice League truly lives on, even in times as dark as this. Especially in times as dark as this. (That’s right, kiddies! The big guns are back and they’re mad as hell! Nerdgasm alert!)

Yes. All seems to be going amazingly! That is except for The Flash. He freezes in horror at the very thought of running in battle again. (Yeah. To be honest, this does get kinda old throughout the story. Man up, you wuss! Oh, yeah. He can’t hear me. Come to think of it, I should stop talking aloud anyway.) While the battle rages on, Superman swoops  Lana up in his arms and gets her to safety, by Jimmy Olson. It’s then that a Horde soldier makes a mistake. It begins to try and protect Lana! She orders the Hordesman to stop this and treat her as if she were the enemy! Yes, it seems as if Lana Lang is in fact a traitor! (Okay, let me go on record here by saying that Clark should be with Lana instead of Lois in the NORMAL reality. Not this Elseworlds story. See. So my early comment is still correct as I see it. Whew! I almost looked foolish there!) 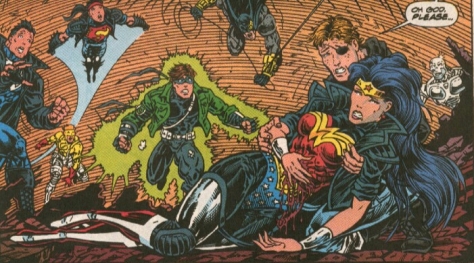 Jimmy pulls a gun, kills the horde member, and then aims it at her! He says that he’d rather kill her and have Superman think him the traitor than let him think his childhood sweetheart was in fact the backstabber. But alas, he cannot force himself to pull the trigger. Lana teleports away just as Wonder Woman arrives. Having seen and heard everything from above, she tries to comfort him. This doesn’t last for long though as a Horde soldier emerges and fires at Jimmy! A true heroine to the last, Wonder Woman takes the shot in his place! She dies soon after Green Lantern smashes the enemy. (No! You’re too important to the world to die like this! I ask you, who’s really gonna miss Jimmy “goofy bowtie” Olson? Exactly! Not even his mama!)

Before the heroes can begin to comprehend what has just happened, a Horde ship descends from the heavens. A holographic figure and booming voice are seen and heard by everyone in Metropolis. It is the supreme ruler of the Horde! He tells the people how disappointed he is in them for allowing this little metahuman skirmish to happen and that tomorrow, every last man, woman, and child within the shielded city will perish in retaliation! (Wow! Talk about a punishment! And I thought being grounded from my Nintendo for a month was a living hell! Granted, my punishment did last longer by comparison so, draw your own conclusions as to who suffered more!)

The group escapes into a safe house to rethink their situation. While they do this, Superboy decides to go catch some Z’s elsewhere. He is soon met by Batman. He discusses attempting a secret mission that only involves the two of them. Happy to please, the youth agrees. That’s when Batman gasses him from a compartment within one of his gauntlets! We next see Batman, within Horde armor, attempting to gain entrance into a Horde ship with his metahuman prisoner! After some typical Batman persuasion, he and Superboy’s unconscious form are teleported within! (I hate to point out the obvious Star Wars plan here. You know where Han and Luke dress as stormtroopers and pretend Chewie’s their prisoner to gain access into the Death Star? God, what have I been doing with my life? Sob…… Psyche! A nerd’s life is the life for me!)

When aboard, Batman quickly disposes of the Horde armor. He then gasses the unconscious Superboy with an antidote, waking him immediately. Before the youth can pose a question, Batman reveals that the power to the shield over Metropolis is contained within this very vessel! They quickly locate the power source and spring into action against a legion of Horde warriors! They do well but the size of the enemy force finally gets the better of them. Superboy is forced through a window by Horde soldiers while Batman finally is overtaken. But, before he breathes his last, he presses a button concealed underneath the bat insignia on his chest. The explosion that follows sends the craft smashing into a nearby skyscraper! The shield falls soon after! (Rest in peace, Batman. Why, oh why didn’t you carry your aerosol can of Bat Horde Repellent that day? Why?!) 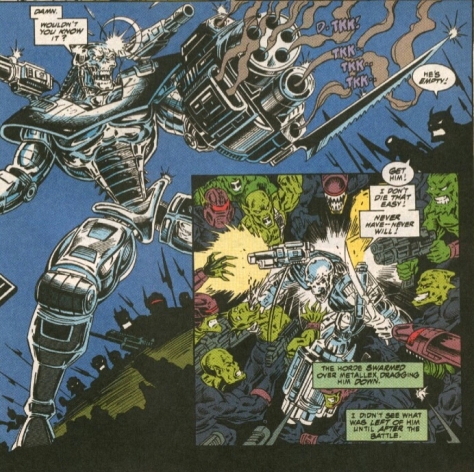 Superboy returns with the news of Batman’s sacrifice but Superman has already called the heroes into action. The Horde has come to make good on their threat! The Super Seven make their final stand. Each of the remaining heroes fights like a champion. Showing no fear, they battle on like the Horde has never seen! Metallex is the next to fall. Once again it is only the number of enemies rather than their fighting prowess that wins the fight. Green Lantern fights like a man posessed! Using his inner demons as fuel, he incinerates Horde soldiers by the handful! But, he is so full of rage that he fails to see a golden arrow launched at his back! Seeing this, the Flash battles his own inner demons and runs like never before towards his friend and ally! The arrow strikes home and the Flash dies instantly. He dies a hero. (Damn! Who wrote this, George R. R. Martin? People be droppin’ like flies!)

Superman and Superboy manage to make it into the Horde mothership undeterred. They fly through the corridors until they suddenly find themselves in front of the leader of the Horde forces himself! The ruler of the invading force stands in full battle armor. To his right stands Lana Lang in the shadows! Superman mistakenly thinks it to be his beloved Lois. It’s then that she steps into the light and reveals herself. It is also revealed that Lois perished ten years ago! She has it out with Superman, that if he had only shown her any interest since the team’s formation, no one would have been killed! Before much can be said in return, the Horde commander disintegrates her with a wave of his armored hand! (Talk about jealousy! You know, I’m starting to think Lana might just be a bad person…..)

The outraged heroes fly into action! But before the fight can truly begin, Metallexs’ still form falls to the ground from above. It’s then that the kryptonite heart lowers from another panel in the ceiling, right over the already weakening Superman! Superboy goes into a fighting frenzy! He beats the surprised alien from one end of the room to the other! But before victory is his, the Horde commander hits the young hero with a powerful hand blast! He then walks forward to finish him…..only to be impaled through the heart from behind by Metallex! The Horde leader is dead! Sadly, upon closer examination, it’s revealed that Superman is as well. Lana calls to the young hero. Surprisingly still alive but quickly dying, she whispers that Superman can still live. Moments later, Superman flies through the top of the Horde mothership in all of his glory! The corpse of his enemy held over his head, he exclaims to the now halted battling masses that the ruler of the Horde is dead! In that very instant, everything changed. 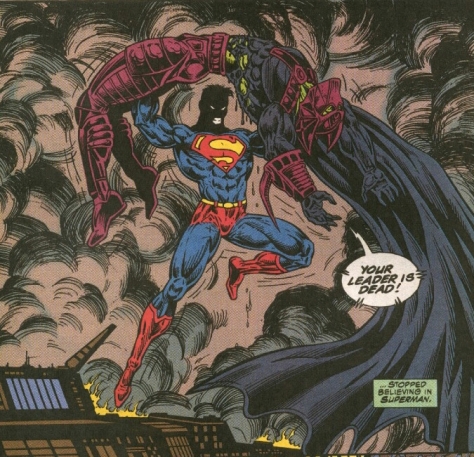 Time passes. The new Superman meets Metallex atop a high building. Before the boy can say much, the once Lex Luthor tells him that he doesn’t care that he didn’t get the credit for finally defeating the enemy. After all, the world needs it’s symbols. They bring it hope and hope is what the human race will need. Green Lantern makes a brief appearance as well. He’s been doing better with his anger and guilt. In fact, he is wearing his old costume and plans on finding and training the next generation of superheroes. When he leaves to do so, Superman goes to leave as well. He is halted by the veiled threat from the former villain. To remember that there can only be one man of steel in the city of Metropolis. Also, that he just finished killing the most powerful man on the planet. He’ll have no problem doing it again. (What did we expect? This is Lex friggin’ Luthor we’re talking about here!) If these words bother the new Man of Steel, he doesn’t show it. He simply smiles and flies off…..up, up, and away into the future!

My next dedication may be surprised that I have chosen him. I’ve chosen to dedicate this article to my brother, Eric James Miller. Not just because he loves this story and has read and re-read it more that even I, but because this story has reminded me that the future is uncertain and, though we have our differences, you should never take a loved one for granted. Life really is too brief.