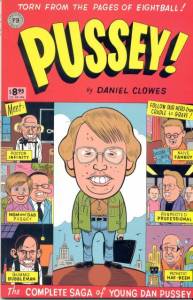 So — how cringe-worthy would it be if I started this installment of our ongoing Eightball retrospective by saying something like “Hey, we want some Pussey — Dan Pussey, that is!”?

I admit, I thought about — for all of about a second. Then I decided not to. Then I (sort of) did it anyway. And that, friends, is the evolution of the creative process in microcosm (even if it’s a hell of stretch to call what I’m doing here “creative”).

For a longer-running (and, obviously, better) example, might I direct your attention to Dan Clowes’ five-year stint chronicling the exploits of the aforementioned Mr. Pussey, something of a “stand-in” character for any number of “young hot-shot” comic book artists that his creator had the misfortune of having to rub elbows with at various conventions and signings over the years — and perhaps even for said creator himself,  if he’d chosen to follow only a slightly different career path and hawk his wares in service of “The Big Two” rather than striking out on his own with more personal (as well as infinitely more relevant and, yeah, better) independent efforts.

To be completely fair, I’m not sure how much of a “dear God, this could be me!” viewpoint was running through Clowes’ mind when Pussey made his first appearance in 1989 in the pages of Eightball number one, but something very akin to sympathy does begin to sink in by the time the character “dies,” in 1994, in issue fourteen. Oh, sure, there’s still something of a “shooting fish in a barrel” vibe going on even at the end, but by then Dan C. has put Dan P. through the wringer in his various occasional appearances over the years, and when he exits a future Earth broke, forgotten, and warehoused in a gigantic nursing home, there’s an almost wistful sort of tone to the proceedings, as if the author is telling his creation “sorry I was so rough on you, buddy — maybe you were, sorry to say,  too easy of a target — so let’s just end things now.” 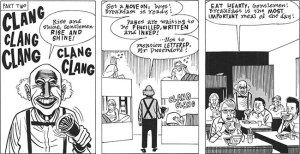 Lending a bit of credence to my “there but for the grace of whatever higher power you believe in go I” theory is the fact that Clowes introduces us to himself before we meet his (at least possible) warped alter ego at the outset of Pussey’s first appearance, with some windbag asshole (who later wrote a letter to the artist when he recognized himself — a letter that Clowes actually, and memorably, printed) telling a bemused “alternative” cartoonist that he has a million ideas for comic scripts and that he should drawn them for him in exchange for “a percentage of the profits” — but as the douchebag makes his departure, our artist crosses paths with another clueless dolt — and our “camera” follows that dolt to the decidedly dingy offices of the Infinity Comics Group, where he and his fellow conscripts have been recruited from the ranks of low-print-run fanzines to begin a “new era” of super-hero storytelling (with titles like “Marionette Squad” and “The Ten-Year Robot War”) being spearheaded by an octogenerian Stan Lee clone named, you guessed it, Dr. Infinity (who would later “star” in a segment of his own where he was shown to be the living personification of every shitty, despicable move made by management against the comics creators who kept them in business, from DC brass screwing Jerry Siegel and Joe Shuster out of the rights to Superman to an admittedly heavily-fictionalized re-telling of William Gaines hanging his EC artists out to dry during the congressional witch-hunt against that publisher, and the industry in general, in the 1950s).

It may sound — okay, it does sound — corny, but re-reading all of these again in The Complete Eightball Issue Numbers 1-18 (note that the Dan Pussey stories have also been collected, by themselves, in the Pussey! paperback collection issued by Fantagraphics and pictured at the outset of this write-up) both brought a huge smile to my face and threw into sharp relief the more considered — and less caustic — tone that Clowes took toward his hard-luck “hero” as the stories unfolded. 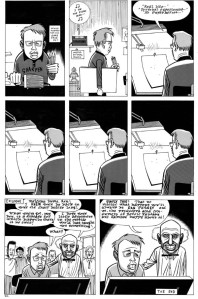 Of course, then-current events in the “comic book landscape” made their way into the Pussey narrative, as well, with Dan functioning as a doppleganger of sorts for the Image creators who were at the “top of the heap” at that time, but Clowes had the good sense to foresee the inevitable collapse their glut of garbage would have upon the industry, and that scenario plays a large part in, as the character himself  claims it’s pronounced, “Poo-say”‘s demise, so this series of strips — in addition to being the only holdover between “phase one” and “phase two” of Eightball, as we’ve previously discussed, gets bonus points for being eerily prescient, as well. Clowes not only had his “finger on the pulse,” he knew what would happen once he pressed in.

And so it is that the wonderfully sporadic misadventures of Dan Pussey probably have the greatest amount of sheer nostalgia value of anything in the pages of Eightball. Everything Clowes depicted either had happened, was happening, or would happen soon enough (in relative terms, of course — by now, it’s all happened), and while it would be a definte reach to say that the real Dan ever lost his contempt for the fake Dan entirely, by the time it was all said and done you could definitely sense that he viewed him as something of a tragic, rather than a purely sickening, figure.

Such a process of “warming up” to his characters would play an ever-greater role in Eightball as a whole, and we’ll delve into that more deeply next time when we take a look at the modern masterpiece that is “Ghost World.” Looking forward to seeing you then!