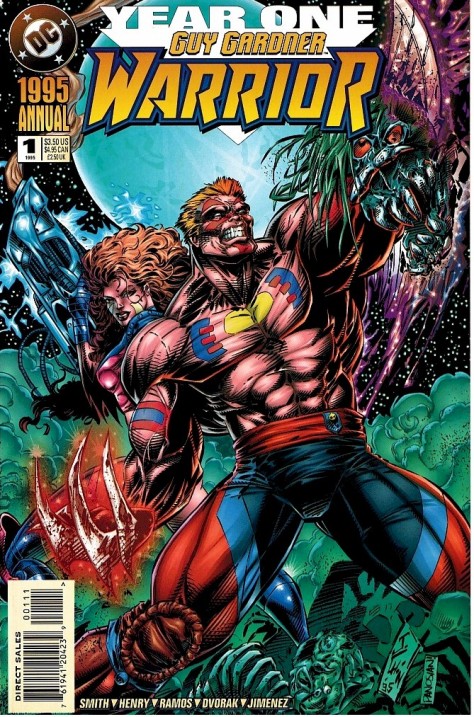 Yeah, I know. He’s arrogant, pompous, and opinionated (Plus a long list full of even more negative adjectives that would make even a sailor blush!) In other words, he’s a jerk. Be that as it may, I like him. Why you ask? Because he’s real. What do I mean by that? Read on and you might just discover that for yourself. The life of Guy Gardner wasn’t what you would call pleasant. He was raised by an abusive, alcoholic father that would rather beat him senseless than show him any affection. This caused Guy to act out in his teen years to the point of becoming a juvenile delinquent. His older brother, Mace, straightened him out though and Guy went to college. There, he played football and earned bachelor’s degrees in education and psychology. He had many jobs after college but none of them ever seemed quite right.

That is, until the day Gardner was chosen to be one of Earth’s Green Lanterns. This was it. His chance to be somebody. To be a superhero! Guy exhibited (Mostly due to his upbringing) arrogant and violent tendencies as a hero. This led him to challenge the rightful Green Lantern, Hal Jordan, into a fistfight. Winner keeps the ring. Guy lost that challenge and surrendered his power ring. 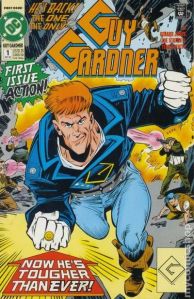 Unable to accept that his days as a hero were now behind him, Gardner next acquired the yellow ring of Sinestro. Keep in mind that the color yellow was the only weakness of a Green Lantern at this time! (Geez! Bitter much?!) But, Guy soon lost the power of his yellow ring after yet another battle with, you guessed it, Hal Jordan! (In Guy’s defense, Hal was now the powerhouse villain known as Parallax at this point.)

But, still unwilling to stop his search for power, Guy traveled to the Amazon. There, he would discover the relic known as The Chalice of the Warrior. Drinking water from it, Guy Gardner awakened dormant DNA placed within his bloodline by alien creatures known as Vuldarians! Vuldarians, as it turned out, were a warrior race that could shapeshift parts of their bodies into weapons by mere thought, limited only by the power of their imagination! This included fantastic bladed weapons and even complex firearms.

Finally, a power to uniquely call his own! Guy, now called Warrior, set out to become the hero he had always dreamed of being. During this time, Warrior defeated many powerful supervillains, gained the respect of other superheroes, and even made peace with his past. 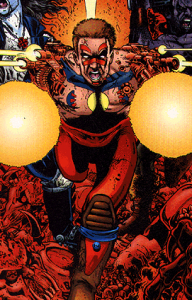 Though this era in the Guy Gardner mythos is often overlooked and, to many, he will always be seen as a second-string  Green Lantern with an attitude problem. But, to me this was the greatest time to read about the character. To me it seemed as if all of his dreams had finally been realized and he had received his much-deserved status as an icon. You see, unlike Hal Jordan, Guy made many mistakes in his life, but he had learned from every one.  He had come from less than humble beginnings and become something much more. Isn’t that what every human being wants in life? To finally receive a happy ending after a lifetime of trials and tribulation? Guy Gardner was and is less than perfect. He is flawed like everyone else. That’s what makes him real.