Hey there everyone, and welcome back to The Unspoken Decade!  I hope you didn’t have too difficult of a time dealing with an entire week between entries here!  If you did suffer from withdrawal, though, we ain’t responsible!  If you are new to the game here, we here at The Unspoken Decade do 90’s comics like nobody else.  LITERALLY.  Literally, this is the only 90’s comics blog dedicated solely to the 90’s that I can find, so can’t nobody tell me different!

Last week, we started a sojourn into the wonderful world of Frank Castle, the Punisher, and it was so nice, I decided to do it twice!  The first issue of Punisher:  War Zone just was not enough to sate the always intense hunger for Punisher material that I carry with me every second of my life, and so I decided to go ahead and review issue #2 in full here for you and summarize the arc that ran for the first eight issues of the title in the Friday Follow-Up this week.

To put things in perspective here, Punisher was as hot as anyone in the early 90’s.  He appeared in all sorts of titles in the Marvel line, and he was especially present in any new title coming out, e.g. Darkhold, Terror Inc., Cage, and many more.  He also carried three ongoing titles (Punisher, Punisher War Journal, and Punisher:  War Zone), several mini-series, and several specials including annual summer, holiday, and back-to-school specials.  I love Punisher as much as, and probably more than Goddamn anybody else, but what the hell is Punisher doing in a special celebrating the time of year when kids return to school?  Also, summer, back-to-school, and holiday sort of follow each other.  Why was there no Punisher Easter special?  Punisher President’s Day special?  Punisher Major League Baseball Opening Day special?

What there was though, was a great cover of Punisher looking like he just invented a spin-off of another 90’s staple, Urban American Gladiators.

(Despite that title, there is neither blood nor water on this cover.)

Punisher has infiltrated the Carbone mob via Mickey Fondozzi, and they are sent to take out a produce importer who has been working to carve a slice into Carbone territory.  Punisher mentions that he would have never found this place as Punisher, but as Johnny Tower, he is privy to much information that would be hard to glean just as Punisher.  Punisher takes the lead on the tactics, and the results can be measured in shell casings and blood.

(Is that Bradley Cooper from American Hustle running this crime den?)

The Punisher and his war are relentless as always, and I love how Chuck Dixon never allows the reader to forget that Punisher sees all of his enemies as the evil men who massacred his family.  Chuck Dixon never shows you how Punisher treats his friends because Frank Castle has none.

Punisher isn’t happy with just the massacre on these goons outside the Carbone family, though.  He is very aware that this hit means the Carbone family would benefit from the records of their rival’s now destroyed operation, so he destroys the bookkeeping records.  Since he hates tattling, he strikes an interesting deal with the rest of the family soldiers with him on this mission. 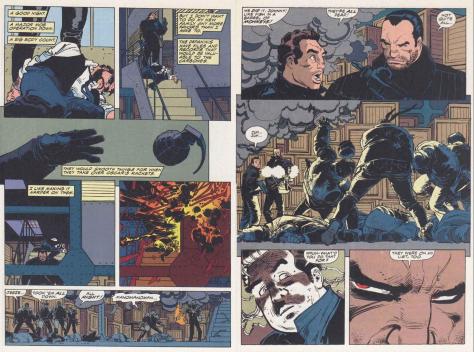 (What can I say?  I find Punisher blowing people away interesting.)

Julius and Sal, the brothers who run the Carbone family, see the outcome of the operation differently.   Julius, the Don of the family, sees the operation as an unmitigated success as he ponders the classy move of sending flowers to the living family members of the folks he just had Punisher kill. His brother Sal points out that the team failed to extract the books as instructed, and he is leery of the fact they lost so many guys, (including their nephew).  Julius uses everyone’s favorite useless boss’s line, “I’m in charge”, to brush aside his concerns.  As well everyone knows, that always solves every problem.

Julius is so impressed with the Mickey/Punisher (who they believe is Johnny Tower) combo that he gives them the operation their nephew used to run.  Mickey also takes this opportunity to shut Castle out of the decision-making process by informing the Don that Castle “ain’t good for much else besides parking the car.”  Punisher, however, finds a way to glean information that involves neither Mickey nor Julius, but this hurts Julius in a much different and more personal way. 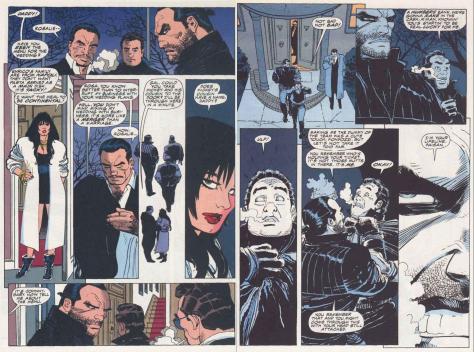 (So, Rosa was apparently just sitting around in her mini-dress, designer boots, and BODY-LENGTH FUR COAT and planning her wedding.  Oh, Mafia Princesses!)

Mickey Fondozzi must be the biggest Goddamn idiot of all time.  How could he think his plan to make Punisher look like a dumbass would somehow work to his advantage?  It’s being stuck in a cage with a rhino who has left you alone and then deciding to poke it with a sharp needle and make fun of its mom.  Everyone knows rhinos are fiercely protective of their families.

Here’s another example of the blatant lack of emotion and empathy found in Punisher.  Rosa is certainly not a teenager or anything, but she is obviously a young lady who is being put through an emotional minefield.  Punisher sees her as nothing but a path to more information, and he sees nothing at all wrong with manipulating her in a time of duress to get what he desires.  There is no such thing as a man named Frank Castle; there is only a force of nature called The Punisher and his war.

Punisher has decided not to allow Mickey to keep the spoils given to them by Julius, but I am pretty sure half of the reason he did it was to look cool as hell while riding a motorcycle through a window as he fires automatic weapons.

(To me it seems that if the police or the mob really wanted to find Punisher they would find the guy who does his custom motorcycle and motorcycle accessories.)

Punisher seems to be having too good of a time, as Mickey tells him that his hit on the numbers operation is a huge deal.  The family isn’t taking it lightly, and Mickey cannot cover up for Punisher.  Someone else is covered up for Punisher, but would rather be uncovered for him.  See the following picture!

(People sure were excited for a third ongoing monthly title for Punisher.  Not as excited Rosa Carbone is for Punisher though, as she must have been waiting with that towel for hours for this moment.)

Obviously, this is going to work out very well for all involved parties.

This arc goes through the first eleven issues of the new title, and it establishes Lynn Michaels and Shotgun as great supporting characters in Punisher lore.  It’s a shame the characters have been used so little since then, as they make for great allies and foils depending on circumstances.

This arc doesn’t drag at all despite the large number of issues.  The title shows the range and ability of both John Romita, Jr. and Chuck Dixon, but even more importantly, it shows readers how everyone and everything is nothing to Punisher.  The creators really show readers how Punisher will do any and everything to any and everyone in order to gain even the slightest amount of ground in the war against criminals.  Usually, the psychotic nature of The Punisher is displayed via violence, torture, sadism, and the like, but the true measure of the depths of Punisher’s sociopathic nature is how he treats the folks around him.  Microchip is nothing but a tool for him to use and discard of if he gets to be too risky.  Rosa Carbone is just a key to a chest of information.  I love this, and it is this combined with John Romita, Jr.’s great depiction of the violence and Punisher’s always empty facial features that makes this my favorite Punisher story of all time.  Look for more on Friday in the follow-up!