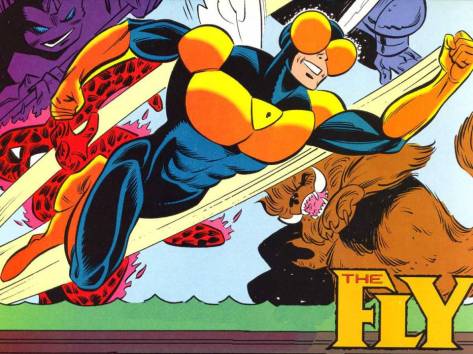 As a kid, who didn’t want to be a superhero? I know I did! I think that was the appeal to The Fly character by DC’s Impact line of comics. Journey back with me to an age where comics were fun. An age where comic movies weren’t the norm, big event titles were more of a summer thing, and heroes didn’t murder other heroes. But first, a little history on our bug-eyed friend.

The Fly was originally created by Joe Simon and Jack Kirby for Archie Comics’ Red Circle line in 1959. After cancellation he was revived in 1984 under the same banner for a short time. The incarnation of the character we will be looking at will be The Fly of the 90’s. In 1991 DC had acquired the rights to all Archie superhero characters and released them under their Impact line. Though the line only lasted until 1993, many fans (including myself), still look upon this era fondly. All of the Impact characters were fun in their own way, but to me, one always seemed to stick out….The Fly !

Jason Troy wasn’t a troublemaker but he wasn’t exactly an honor student either. He was your typical kid. Average in most ways but full of imagination. It was during his high school Mythology class that he was found playing video games during a lecture. Caught by the teacher, he was given the assignment of creating his own superhero based on one of the Earth’s most humble creatures. Jason chose a fly. (Some punishment, huh?) The teacher was so impressed with his work, he rewarded Jason with a fossil of a fly trapped in amber. Soon after receiving this, it was discovered that the fossil possessed the strange power to in fact transform Jason into the character of his design….The Fly!

Wasting no time, The Fly flew into action against an attacking superpowered arsonist downtown, easily defeating him in combat! Excited but curious, Jason reverted back to normal to speak to the teacher. After all, who else would know the mystery of the fossil better than he? Upon his return, it was discovered that no one had ever heard of the strange Mythology teacher! Confused, Jason left school and embarked upon his new career as a superhero! The Fly fought many fun and unique villains throughout the title’s run. He even joined the premiere superhero team, The Crusaders, with other heroes such as The Shield, The Comet, The Jaguar, etc.

But, during a battle alongside these heroes, The Fly, along with several other heroes, disappeared into another dimension. It wasn’t until years later that he reemerged, a man! He was soon married to fellow Crusader, The Jaguar. That was about it. In 1993, all Impact titles were cancelled due to low sales. We were never to learn the secret of the mysterious fly trapped in amber. Sad. But, rather than focusing on the negative, let’s look at all of the amazing adventures he gave us. How, for a short time, all of us around the same age as the Jason Troys’ character felt what he must have felt with the power to pummel supervillains, to meet and fight side by side with other heroes, and most of all….to fly! For the short time that title lasted, we knew what it felt like to be a superhero ourselves.

2 thoughts on “You Will Believe a Boy Can FLY!”