My name is Mark (Sparky) Ryan and I was invited by Dean Compton, my good pal, and fellow fan of ’90’s comicdom, to give some of my thoughts and views on the history of the Marvel UK expansion of titles in the early ’90’s.

So with no further ado, welcome back to part 2 of our brief look at the Marvel UK Explosion  of the early ’90’s. In part one we left you with Death’s Head ||’s ascension to the top of the sales charts, scoring a palpable and bankable hit for Marvel UK division, (#1 went into a second printing, such was the demand for the guarantuan killing machine).

A solid foundation of properties had been built and the bedrock existed for further expansion.

All the UK titles featured many guest star appearances by mainstream US heroes. X-Force appeared in Warheads, X-Men in Dark Angel/Death’s Head ||. Iron Man appeared in both Warheads and Knights of Pendragon.

Reed Richards made an appearance in Death’s Head || also, in an entertaining story where Death’s Head was trying to assimilate his genius intellect and was thwarted. Wolverine appeared again and again over the next two years. Venom appeared also in ‘Wild Thing’ in 1993.

As you can probably guess, these guest appearances were solely to anchor the UK line in the American market and attract US readers to these new properties. As an attempt to ground the UK line and become incorporated into the US line, it was ultimately a failure, for several different reasons.

One major reason was that the US characters were being shoehorned into the story in an inorganic, forced way which often made little sense. Guest stars could turn up at any juncture with little rhyme or reason.

Whatever happened to say, the X-Men or Iron Man in the UK line was never, ever referenced in the characters’ US book which essentially told readers either directly, or subliminally, that anything that happened to the US characters in the M-UK books was inconsequential and ultimately so was the line in the greater Marvel Universe.

Another problem, which connects to the last one, was that so many of the US characters were tied up in the UK characters’ war with the Faustian group Mys-Tech that it further distanced itself from the greater Marvel Universe than say, if both parties did battle with A.I.M or Doctor Doom etc.

Mys-Tech was a new creation that even sole readers of the UK books would have had to wait to read more to find out more about them and their motivations. It was clearly a Mys-Take.

This further served to make appearances by US heroes seem inconsequential and unimportant, as the adversaries involved were unknown and little understood by the casual US reader that was trying out these books for the first time to see if they were any good.

Probably the biggest problem, was however that the UK heroes never appeared in the Marvel US comics, and I honestly believe that this was one of the major downfalls of the M-UK line.

In fairness, for the UK team to co-ordinate their efforts with the US editors and writers who would be using the UK characters as guest-stars would have probably caused a major headache for both editorial and writing teams, both of whom were already under the yoke of an increased workload during the explosion of titles during the’92-’93 bubble.

One property proved an exception to the rule. That exception was Motormouth and Killpower, who appeared in the pages of Incredible Hulk #409, in 1993. This incluson may have been prompted by then artist, Gary Frank, who also happened to have been the artist on the Motormouth title.

One of the big storylines from the UK branch was the Mys-Tech Wars. This was a four issue limited series that featured a battle between the UK heroes and Fantastic Four, X-Men, the Secret Defenders and a wealth of other US heroes against the clandestine group Mys-Tech (again).

It also crossed over into several UK titles. Even with the inclusion of all these heroes, it is very much forgotten on both sides of the Atlantic despite having a reasonable story and some very nice art. It features some smart writing by Andy Lanning and fine artwork by the great Bryan Hitch. Check it out. 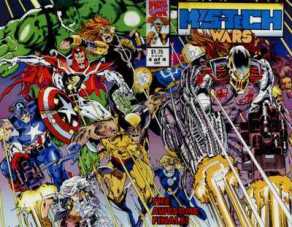 Battletide is another decent story. It featured a Death’s Head and Killpower (from Motormouth) and almost the entire Marvel Universe. It was silly, but fun. Like a lot of the UK output – it didn’t take itself too seriously. The Geoff Senior (Transformers/Dark Angel) artwork is worth the price of admission alone.

Super Soldiers was a decent title that appeared in mid ’93 and featured a guy who was a product of a UK Super Soldier project a la Steve Rogers, who started his career in the Falklands War and his team. It makes references to Daredevil’s Nuke character, and uses the tried approach of featuring US characters such as USAgent. It’s worth a look.

Gene Dogs was an attempt at an X-Men type property/knock-off. It ran for a 4 issue limited series. Genetix was another title that debuted in ’93. It was ok.

The direct market imploded in 1994 and the bloated Marvel UK imprint which had appeared so healthy before was now in bad shape and eventually had to close its doors. Several commissioned and completed work remains unpublished including Armageddon Knights. This was a rework of the Knights of Pendragon.  Loose Cannons by Dan Abbnett was another project that never saw the light of day. In 1994 Marvel UK tried a slight re-brand, introducing the Frontier line. It ultimately failed.

It is sad that such an ambitious project by the UK office ended so unceremoniously. They had definitely over expanded their line flooding an already bloated market and experienced diminishing returns. Had editor Paul Neary decided to keep publishing a small group of say, five popular titles they might have enjoyed greater longevity.

To tell you the truth, the larger the line got, the lower the quality of the product reached in my opinion (The UK office were far from unique in this regard in the early ’90’s!). Some of the later stuff like Nikki Doyle:Wild Thing is risible fare, as is Plasmer.

Later Marvel UK mags featured a lot of T & A and big guns perhaps in an attempt to appeal to lowest common denominator, pubescent tastes, or maybe it’s just a reflection of the general (an)aesthetic that was prevalent across the board in comics.

In reality, Death Head || is really the only property remembered well by long time US readers. The Marvel UK characters have returned to Marvel US pages recently in Revolutionary War and it is being reasonably well received.

Be sure and join us on Sparky’s Longbox if you wish to read about some Bronze Age classics!! Or join us on  Marvel UK Comics on Facebook!!!!!