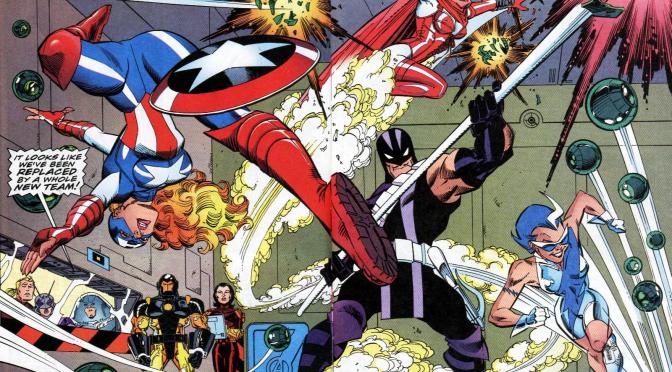 Welcome back to The Unspoken Decade!  I hope all of you have been enjoying our MC2 summer!  If you haven’t been enjoying it, then get ready to not enjoy it some more because we’re continuing the journey today with another look at A-Next!  But have no fear, there are only two more entries after today’s look at A-Next! The reason I decided to split up the entries on A-Next was because I wanted to take a quick look at a new round of Avengers that showed up on the scene of A-Next very quickly – too quickly, if you ask me.  Also, we needed lots of space for the original Defenders! A-Next continued one of the most beloved Avengers tropes in history, which is the shaking up of the lineup!  I know many of you have seen issue after issue of Avengers with one of those great covers that usually has a giant question mark or a group of faces on the cover with the copy “Who Shall Be The Avengers?” or something similar.  You know, like this:

A-Next did a little differently, though, and while I have been somewhat hard on Tom DeFalco here and yon, I can say I liked this twist on the trope.  Instead of a dissolution of the existing A-Next squad, Mainframe, the mysterious robot that appears to be a Vision/Iron Man hybrid, just decides to bring in a bunch of new heroes. The youngsters comprising A-Next are taken aback by this, and rightfully so.  Remember when you were young and you finally got some sort of brass ring, whether it was getting to be in Gifted and Talented class or you were named starting shortstop for your school baseball team or you even finally caught the eye of that young lady or fella you had been pining for since the first day of homeroom?  What a fantastic feeling!  Now remember when you found out others were coming into GT, that your coach wanted to start working out your arch-enemy, Tyler Kensington at SS, or your new belle or beau is all of a sudden captivated by their lab partner?  That feeling was a little less delightful in the same way that having leprosy sucks a smidge. Well, that’s pretty much what happens to our pals in A-Next, although I don’t find it to be all bad, mostly due to my favorite A-Next character aside from J2.

But what the hell is up with those sexy “Brian the Dog from Family Guy” costumes?  Is that some guy’s fantasy?  He wants you to be a cartoon dog?  Or the lady dressed up wants to be a cartoon dog?  I find this befuddling and the root of the decay of America. I kid.  Mostly.  But I really do like American Dream.  I like the name, the idea, and the costume.  The creative team does an outstanding job making her impressive.  While she is obviously a derivative of Captain America, she grows into her own character that holds onto many of the same ideals and traits that we have come to know and love in Steve Rogers.  Of course, she didn’t meet the original A-Next group on great terms, though, as it was a total surprise to them that Mainframe was talking to any other teenage heroes to take up the mantle of Earth’s Mightiest Heroes. So you can only imagine the dismay that J2, Stinger, and the rest of the gang must have felt when they waltzed into their HQ and saw this!

His name is Freebooter, and we are shortly introduced to all of them.  We also learn that whatever things Mainframe has been programmed to do, one of them is not dealing with teenagers well.  He’s basically dismissive of their feelings and concerns, much to the delight of every cantankerous old neighbor on nearly every sitcom ever.  Why coddle the kids when you can just talk down to them in a mean robot voice?

Seriously though, is that the best Mainframe and Jubilee can do as far as integrating this team?  This is such an awkward position for both groups of teens here, and they are handling it with all the care that a bulldozer gives a pile of debris.  You’d especially think Jubilee would be better due to her history as a teen superhero.  Then again, maybe when she got demoted from the X-Men to Generation X she took it really hard, thus influencing her callous nature toward the young A-next squad here.  Of course, she is Mother F’n Goose in comparison to Mainframe, who epitomizes everything we fear about the imminent robot takeover of mankind.

One of our heroes is especially hit hard by this turn of events, and J2 takes off to sulk.  Remember taking off to sulk when you were young?  Man, I don’t know if it was just the 90’s or not, but when I was a teenager, if we gathered in groups of more than three, someone would have to get upset and go off to sulk.  Sometimes, that sulker was me.  These teenagers, despite their powers, are no different.  Dibs on being Juggernaut, though.

When A-Next shines, I feel like it shines due to moments like these, where I can actually recall my own similar personal moments, where I separated myself from groups for slights both real and imagined, but also for just feeling out of place.  I always treasured those moments when someone would come to check on me and make me feel like I belonged; I am sure J2 felt the same.  If you want to recall those days, read A-Next, Spider-Girl, and J2.  You will recall what it was to be young.  In three weeks, we’ll tackle Wild Thing as part of the MC2 summer!

Next week, Angel Hayes returns with a great article on Animal Man, and the week after that, Emily Scott ventures back into Vertigo as she looks at Enigma!

One thought on “The World You Have Always Known Is Born MC2-Part 4 Featuring A-Next Continued!”

Leave a Reply to Ben Herman: In My Not So Humble Opinion Cancel reply