The X-Men awesome. The Doom Patrol? Even better. But what about not a team…but a Kingdom? A race? A civilization?

Allow me to introduce a people whom need no proper introduction

This run has a foreword by the great Alex Ross himself. He gives his Kudos and says how excited he is for it. If Alex Ross doing your foreword isn’t a good sign I don’t know what is.

The Inhumans, if you are unfamiliar, are a race of amazo mutants. Whom use the Terrigen Mists to alter themselves to their utmost genetic potential. Because their abijlites are geneic based The Inhumans exist in a weird kind of Genoarchy, where selective breeding, training, and exposure to the mists has created the most potential in their race…Anyway we’ll be covering a lot of it as we move on.

Let’s take a minute to appreciate that cover. LORD JESUS, that cover. Bold title space that expands over, great v formation of the subjects, making them look bold and heroic. Their uniqueness highlighted as well as it can be while staying in the confines of the cover. The light play is what really gets us. Showing us passing glimpses of our beautiful inhumans while tying together the cover as whole the shimmer from the title is the same kind of gleam that we see in different spots.

Now that I’ve satisfied my terrible cover lust we can move forward.

Page 6 is an alternative cover that for this version is just an awesome splash page. And amazingly 90’s.

BlackBolt is our stoic king. And with good reason. One of his whispers could destroy a planet. Simultaneously, he is the strongest most perfect mutant ever. Someone so trapped by their own gifts but given power for them. The king of an empire that expands outward beyond the stars can never do something as mundane as singing in the shower.

I find that fact that the most powerful man in the universe can use his voice the least absolutely lovely.

Another amazing thing about BlackBolt is because of his lack of a voice so much more attention to his body language is given by the artist.

I don’t know if you noticed but I kinda have thing for art.

Next up we get to see some amazing views of Attilan (homeworld of the inhumans) as Blackbolt flies overhead. This is a world of purity. In addition, to the amazing diversity of it. Inhumans have had lots of trouble with the impurities found on Earth. They keep Attilan as perfect as they believe themselves to be.

Lots of awesome diverse Alien shots, lots of introspection on Blackbolt’s part. But what else can you do when the only voice you may speak is in your mind?

Blackbolt finally lands and we get our intro title splash page 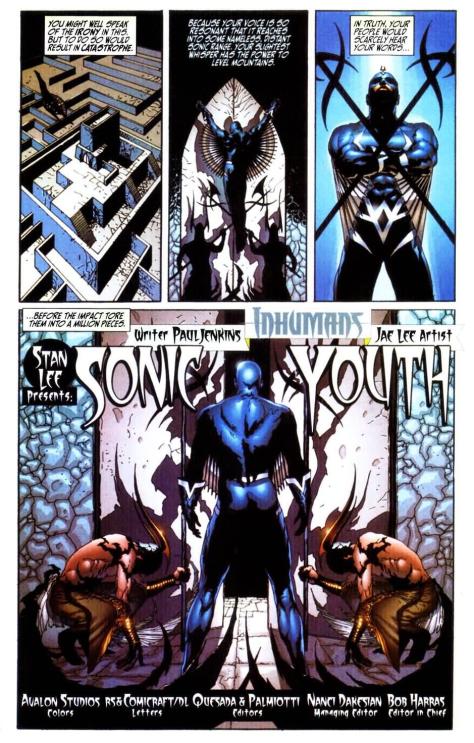 Blackbolt has arrived at the Attilan Prison. To meet with his amazingly crazy Brother, Maximus.

Maximus is crazy as can be and continues to berate his brother who looks upon him. He brings up things of the past. The death of their parents and how Maximus tried to side with the Kree. How he knows Blackbolt won’t ever say a word after accidentally killed their parents.

And this is what happens when we argue, Brother.

To stop his brother’s plans Blackbolt was forced to speak and in doing so cause much destruction including the death of his parents.

In these panels we see an amazing dynamic principle, it conveys the continual sonic energy through out it. Also the light shifts to match the rest of the destruction. Such a glorious page of fire, sound, and loss.

In the next beautiful page of shadows, Maximus accuses Blackbolt’s silence being an indication of his guilt. Blackbolt leaves his brother to his madness.

The losing sibling always slumps in the corner.

I cannot get over the shadows on Blackbolt. Darkness and silence merge together into panel of loneliness.

Maximus screaming his madness and we can see that his only view is of himself. The continual scourge of hate from his mouth and back through his reflection.The way the brothers are shown to stare at one another.

Through one another. It makes my heart ache.

We now take a drastic turn to show the current state of living from the Inhumans and how they view the earth and humanity in turn.

The barriers that protect the Inhumans from our pollution. The way they view our greed when it comes to natural resources. Our destruction of one another. But also how some are still noble. How we can be loyal beyond a fault. Our ignorance to what we do to each other.

And how close we are to their kingdom.

Another major shift and we find ourselves inside the royal court. Queen Medusa is talking to her handmaiden, Marista. 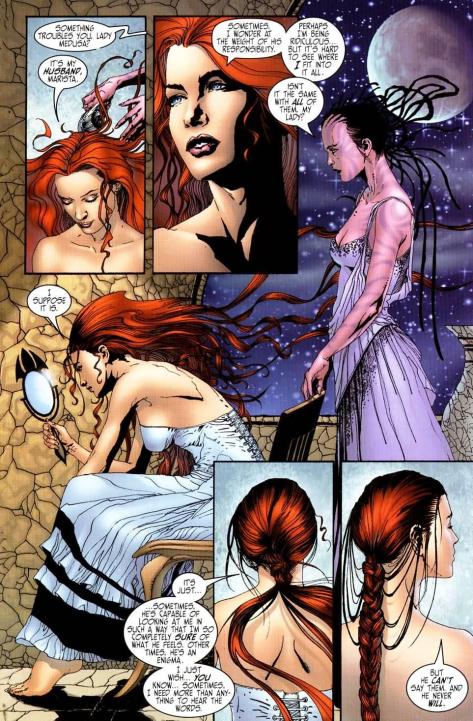 Medusa worries for her husband and the fate of Inhumans.

The page is the first intense color we see in the whole comic. Bright hues and intense color contrasts make this feel so fantastical. I adore alien nature of it.

Queen Medusa continues to speak her thoughts onto the next page which is breathtaking.

Queens keep it classy with slips.

The way they focus Blackbolt’s head into the center of the panels. His mind against the stars; He is the center of the universe. While he mediates it’s almost as though he is single-handedly realigning the very stars.

Over the next two pages we see the royal family blessing an inhuman infant. Blackbolt muses over all the things he wishes that could relay to the new life his race has created. 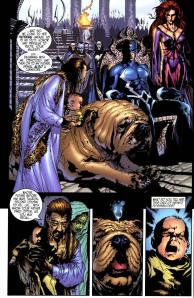 I couldn’t put into words what Blackbolt Couldn’t Either


These pages are beyond entrancing. The pull of focus by using washed shadows is just incredible. So beautifully subtle you don’t even feel the tug of the panels.

Moving on, we experience another shift this time to Kanark and his brother. Kanark is the adivser to the throne. His mutation allows him to see all weaknesses. To calculate all outcomes. Karnark in the past has been represented as haughty and outspoken. Here he is shown as more wise and introspective.

The art takes a bit of a dark cast here. Like subterfuge with red toned shadows. 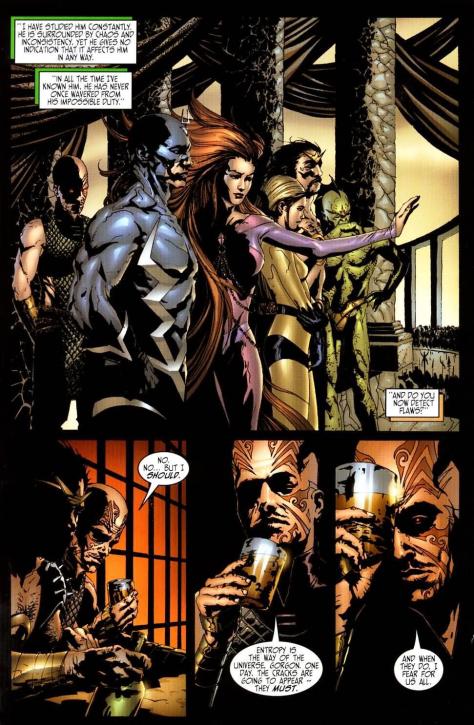 That’s how my family poses for a portrait.

Kanark seriously considers how his King appears to have no weakness. Years of not being able to predict what will happen next to him. For someone who’s gift is that of the breakdown of future events and current weaknesses never being able to find the current path for your commander…your friend…your family. Must be a terrible fate. To see all the strings but never find the knot.

Kanark’s musings will come back to us in time. Now it is time for dinner though.

The Royal Family meets and discusses the current state of affairs complete with bad joke from Gorgon. 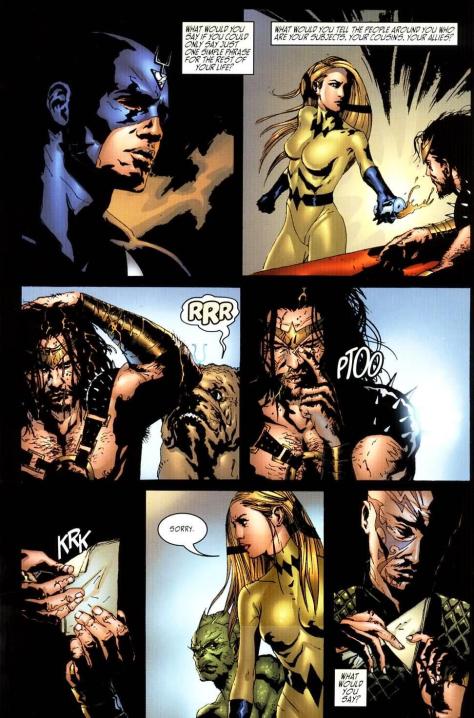 And all this beautiful art. The soul filled narrative has lead to this one final page. The one pervading thought across this book is…

From the mindset of an undefeated King what else would you say to your subjects?

I hope you’ve enjoyed this departure with me on one of my favorite lineups in all of comics.

See you past the mists,

One thought on “Kingdom of Silence – Inhumans #1 by Angel Hayes”