Hi. My name’s Symbifan. I’ve spent quite some time gracing you Unspoken Decade fans with my musings over cherished tales from 1990’s Marvel and DC (and one cleverly written Archie Comics epic). But sadly, those times are now through. Thats right, I’m done.

Ha! You really fell for that? I just meant that this particular article won’t be about a Marvel or DC Comics character! No, I’m simply stepping out of my comfort zone to bring you the story of Prophet, an Image Comics character. (Terrified you, huh?) Well, now that I scared the bejesus out of you guys, I should probably just begin….

Jonathan Taylor Prophet was a man possessed. (And I don’t mean possessed like your typical 2010’s “horror” movie. Anyone else miss the good old-fashioned slasher flicks? I know I do!) As he trudged through the barren wasteland, his thoughts turned only to combat. To calm himself, he remembered his favorite Bible passages. The Word kept him controlled, a comfort to a warrior’s mind.

He pauses a moment to reflect, his muscles tense for the coming conflict. He doesn’t have long to wait. Several orb-shaped mechanical attackers arise and prepare. Prophet pulls twin blades and takes an easy breath. They attack. The numbers are definitely on their side, a lesser man would fall easily. But Prophet is no ordinary man. He dispatches the robotic foes with ease. The orbs are replaced by more humanoid metal assailants. Now in full fighting form, the warrior slices through them as if they’re composed of hot butter. (Mmm! Damn! I wants me some toast now! Hmm….out of bread. Ah, the life of a starving artist….)

A rope ladder appears past his oncoming attackers. Seeing the automatons have multiplied in number, he takes a calculated risk and leaps. As his hands grip tough rope, he’s pulled to safety by the flying vehicle it’s attached to. Upon reaching the top and entering the craft, Prophet is shocked by who his saviors are. A man cloaked in shadow and adorned with a long, flowing red cloak and…..Mary, the long-lost love of his life!

The look upon her features is one of obvious and malicious betrayal. The man, though in shadows, looks pleased at the pained look on Prophet’s face. Prophet finds himself at a loss for words. Just then, the hooded man slowly reveals his face. It is one that our hero knows well. It is his own!

He wakes up screaming. Kirby, his trusted friend, lowers his already diminutive form to look upon John Prophet with concern. (“Diminutive.” And you thought it was more fun to hang out with friends than study in English class, huh? Fools! Now, I can say “short” in intelligent sounding ways. Ha!) Kirby listens as John recounts his dream. The small man simply dismisses this as John’s need to reconnect to D.O.C.C., the satellite that is the source of his amazing abilities and a type of “center” for his rage-filled mind. 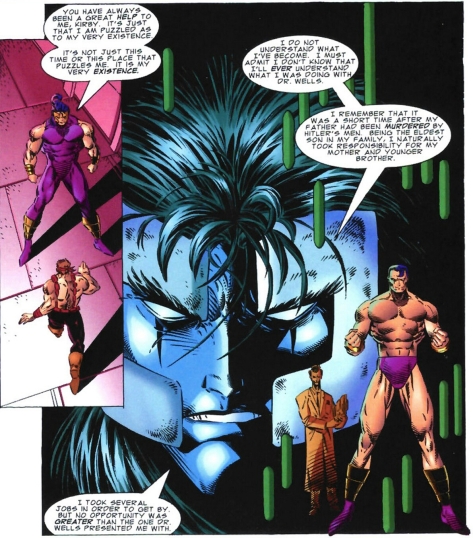 This calms Prophet somewhat as he sits up in what we now see to be the inside of a moving helicopter. Kirby questions the pilot as to an arrival timeframe. The man replies that they will reach their destination in fifteen minutes. The small man makes his way back to Prophet and the two gear up for whatever mission they’re about to begin. As they do this, Prophet admits that he is in a very confused state of mind. He recounts his origins aloud to his dwarven partner. (Oooooh! An origin story! Sit back and grab some popcorn, kiddies! We’re in for a real treat! After all, we all know just how much superheroes despise recounting their origin stories…..Ha, I barely typed that sentence with a straight face!)

Jonathan Taylor Prophet began his journey a short time after his father had been brutally murdered by Nazi soldiers. Not wanting to become a hindrance to his mother, and being the eldest of two boys, he tried his hand at many odd jobs. But, it was the work that he did with a man named Dr. Wells that would change the course of the young man’s life forever.

He would endure countless physical and mental tests over the course of several weeks, sending money home to get his family far from Germany as tensions rose in the world. Prophet was assured that, in the end, he was to become superhuman. Wells definitely wasn’t lying! He was even given a brightly-colored uniform and an indestructible shield! (Hahaha! Sorry! That was just too easy!  Forget that last sentence. I’ll be good now. Promise.) The warrior-to-be even befriended Dr. Wells’ lab assistant, a young Kirby. But, this was not to last. John was told that Hitler had caught wind of this project and sought to make it his own! Quickly, Prophet was assured that his family and young fiancee, Mary, would be well taken care of, but to keep him from enemy hands, he would need to be put into a type of cryogenic sleep. He would be awakened in the future to be mankind’s savior against an enemy Wells called the Disciples. Prophet agreed, and soon, he slumbered.

Awoken only recently, Prophet was now allied once again with a now much older Kirby and in search of the D.O.C.C. satellite to help clear things up in his confused mind. Meanwhile, as the helicopter nears its snowy destination, we turn our attention to Washington, D.C., the interior of the Pentagon to be precise. There, we look in on a meeting already in progress. A man in glasses speaks to those assembled around a large meeting table about Prophet and his superhuman capabilities and how, given proper funding, his creation process just may be duplicated! He finishes by stating that the subject remains at large at this time, but their new liaison assures them this will be corrected very soon. The liaison enters the room dressed in a crimson jacket and matching skirt. It’s John Prophet’s fiancee, Mary! (Shocking, eh? I mean, a crimson outfit worn at an important government meeting? Tackyyyyyyyyyy!) 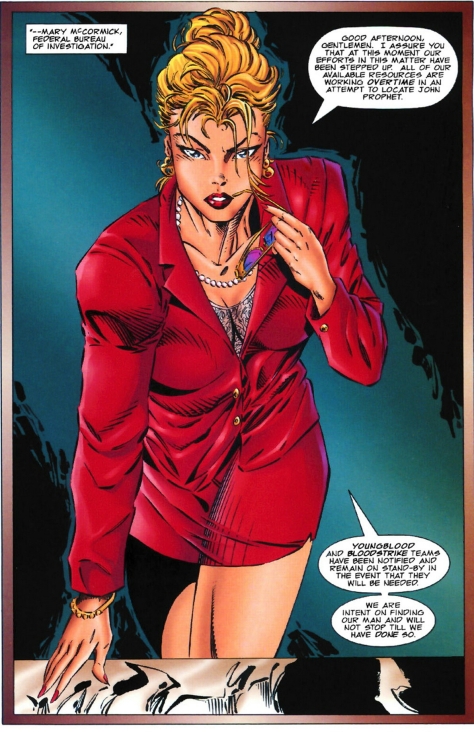 We then return our attention to the two heroic figures that now parachute down to the frozen earth below. The two free themselves from their chutes and begin to get their bearings. Kirby admits that this mission may just go awry. They are infiltrating a secret government facility, after all, and technically, John is a wanted man.  (Good time for cold feet, Short Stuff! Where were these second thoughts during this entire godforsaken journey?) The smaller man asks the taller for advice. Prophet states that he has already said prayers to the Lord above. Kirby replies that he would appreciate a better battle plan than prayers. They both suddenly find themselves surrounded by heavily armed soldiers that demand the two freeze! Kirby rethinks his earlier statement about prayer. They may just need all the help they can get!

Well, Legions of the Unspoken, that’s the end of issue one of Prophet and this article. If you want more of ol’ Symbifan’s thoughts on later issues of Prophet, leave a comment and I’ll maybe consider making this a ten part series. But, until then, stay classy, comic collectors! Symbifan….out! 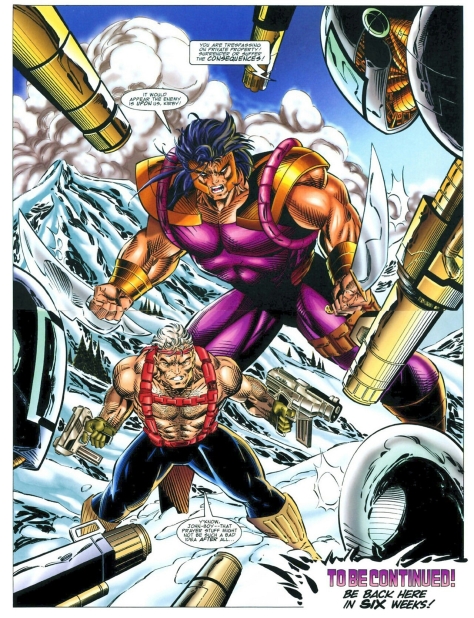 Dedicated to my mom. Though we are now separated by miles, know that you will always be with me in my heart. I love you.