Hello there again. Getting back into the swing of things here. I usually have a very strict comic analysis format. It has a lot to do with how I read through the panels and my intense desire to share the comic with you in the same fashion that I absorb its panels.

I like to stop and focus on the art, the shifts in color, the finesse of the letters, the way they work seamlessly with the story to convey their perfect intentions. To pull your mind around a racetrack of stimuli, to deliver something that the art world and the written world could never accomplish by themselves. The ultimate team up of art and personal stories of triumph, growth, defeat, and things larger than ourselves comic books serves as a gateway to our courage, the unforgiving ways we feel about humanity, and the things outside of our daily concerns.

For these reasons, it has been a very difficult and different experience writing these next few articles. See that intense desire expanded to share not just a single book with you, but an entire adventure. It has been a process for me to try and pull my attentions further than I am used to. I hope it pays off.

So without further ado, let us venture forth, my dear friends.

I couldn’t tell you exactly what first attracted me to the Animal Man comics. At the time I was picking up tons of story arcs and a lot of obscure comics I had missed in my youth. I grabbed them up and have never looked at comics the same way.

……I honestly think I have something for the orange and blue contrasting color combination.

Animal Man wins the nonchalant hero award repeatedly while having a much much deeper undertone. I mean his name is Buddy, for goodness sake.

Animal Man was one of those heroes with a good concept and a mostly forgotten execution. The idea of a superhero who can have any ability of any animal is not unheard of. The idea that he absorbs it from the life energy of earth is both super weird but really awesome.

A concept that FFVII completes beautifully with a bad haircut. And no noses.

Like so many other forgotten or overlooked heroes, Animal Man was resurrected in the late 80’s pushing into the 90’s and represented the shifts in perspectives from one decade to the next perfectly.

Bright colors and dark line work are the rules for most of the first few issues of Animal Man, looking much like early to mid 90’s American animation.

We begin with Buddy having an afternoon with his family in the suburbs. His family seems to be rather normal. A general discussion of the future between himself and his wife Ellen commences. Only it’s about his career…and how he’d like to get back in the superhero game. With JLA making headlines, etc., he wants to use his powers to provide for his family and find a place for himself in the process.

I swear that the World’s Greatest Mom shirt is the only reason embroidery stores exist.

This is the beginning of what seems to be a nice, if odd, homebody of a superhero story. The next 26 issues that follow both amaze and push the idea of what I thought you were allowed to do with comics. The schizophrenic nature of the comic actually helps me focus on what I think is more important in the overarching story. To lead the reader without holding hands. To push your eyes to follow the paths that you love and to rediscover new points as you gloss back over.

Reading Animal Man truly is an adventure that is unique. Every page goes quickly. Then your mind demands you repeat it. Until the block colors bleed over and the lettering stacks against the panel boxes. Until Buddy’s humanity makes you smile.

Back to what is at hand. 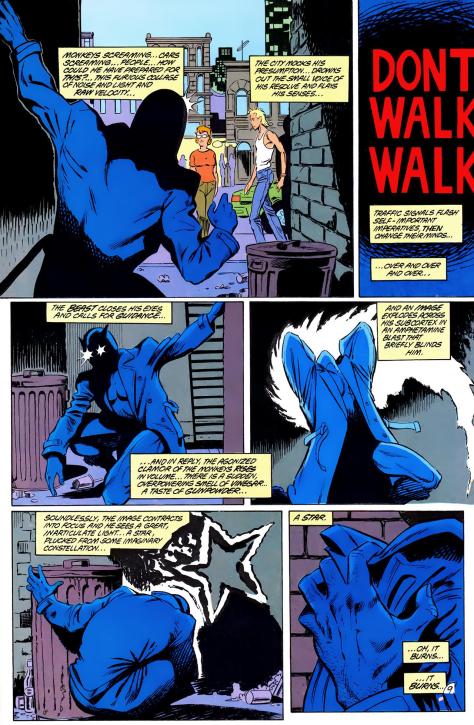 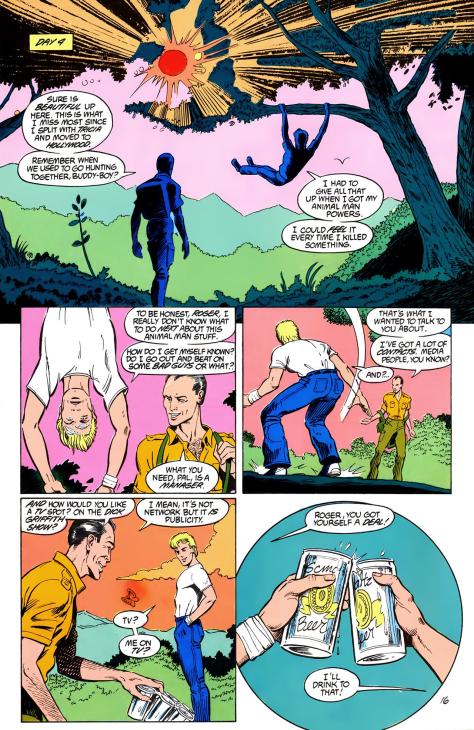 A beast hears the cries of the forgotten. Moving with haste through a concrete wilderness, we see his despair. We feel the isolation in the dark shadows and cool themed colors. All the major action done with gray chromatics, the rest of the city in the bright block colors we’ve grown accustom to.

As this drama unfolds, we jump back towards Buddy who is now serious enough to get a manager for his superhero career. I mean, nothing says a great future ahead like getting a friend and neighbor to be your manager. And then have a canned non-descriptive beer to celebrate.

Animal man appears on terrible television like we would all probably do if we were superheroes. After the usual “THAT’S SKIN TIGHT” costume joke from what appears to be Richard Dawson in comic book form we move on to a heart to heart with husband and wife. I love to see this dynamic in a comic book, where the more normal of the two has no real problems helping the super with their ambitions but still maintains their own existence and personality. I also love that weird model-style cocked hip panel of Animal Man. Because Orange and Blue is fabulous.

And with that he is off to investigate the odd happenings in town. Buddy is called in by S.T.A.R. Labs. 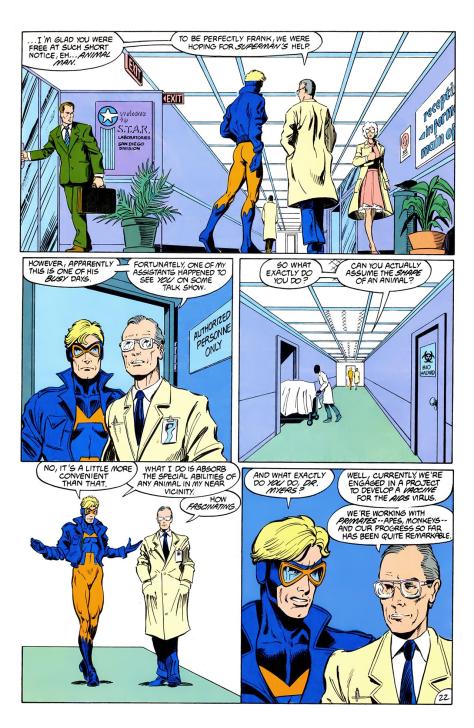 After being told he was the D-List in superhero choices, his powers are then questioned, and I can’t help but imagine that Dr. Myers says, “How fascinating” with all the enthusiasm of a older generation carnival worker. We find out good ol’ S.T.A.R. Labs is having research issues with primates. Animal Man finds lots of damage the likes of which he can’t imagine a normal person could have caused.

Much more distressing than that is what they left behind. 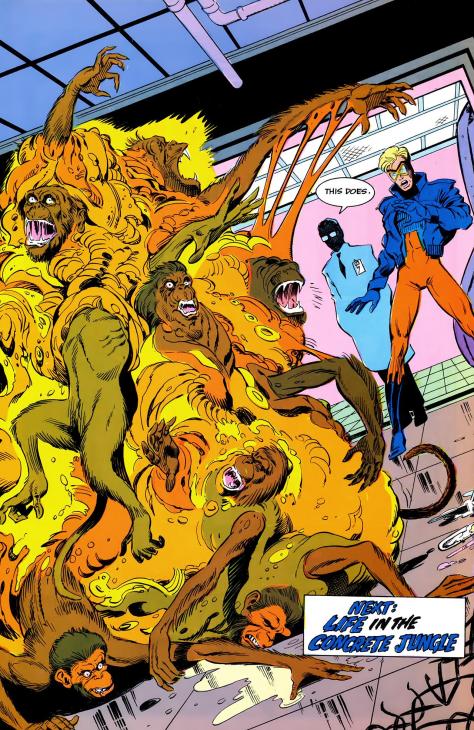 Just look at the horrifying state of it: faces of confusion, despair, fear, pain, and anguish dominate the being and this entire page. The melding of vibrant colors and textures create a frenzy of mercurial reasoning. No beginning or end to be found. The fear alone trapped within this panel is enough to give me nightmares. The movement suggested by the being before us is almost nauseating.

What has Buddy gotten himself into?

Thanks for bearing with me on this first foray into our Animal Man adventure. I cannot wait to continue it with you. Expect plenty more parts and more often than usual!

Until next time…and Don’t Forget…Evolve or Die.